Don Kessler is building his Merlin in Dayton Ohio.

Just an update on what I have been up to…

I bought a very nice stick grip (nearly identical to what I have been used to) during Oshkosh, but the wiring bundle from the 10 switches (trim, PTT, etc., etc.) was just too impractical to accommodate and I wanted to be able to route the switch signals to various radios, etc., without needing to route a big wire bundle everywhere.

So I designed small circuit board to sample and debounce the switches, then send switch status via a twisted pair to anywhere it is needed.  It works great.  I have extra circuit boards, etc.  You are welcome to use this if you wish. 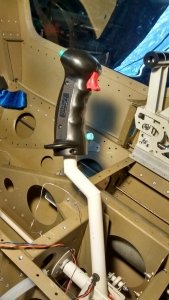 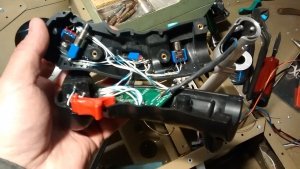 One of the issues I was starting to run into given the small size of the Merlin is the lack of space to keep anything in the airplane. Even the few “remove before flight” flags, etc., have no good and convenient place.  There isn’t even any place to keep the most basic tools that I would need during a simple gas & go, etc.

However, while running the wiring and BRS release cable, I noticed that there is a quite a bit of wasted space below the seat pan.  I did make use of some of that space to hold the oxygen bottle, but the remaining space was otherwise going to be unused and inaccessible.  Last week I decided to cutout and install an access panel for tool storage along the right side of the seat pan, under the cushion.  It worked out so well that I decided to add another one just forward of it (right behind and below my right knee).  I will line these with foam rubber to keep the contents from knocking against the skin.

While I was at it, I added an inspection panel in the center as well.  I also added a small shelf above the push rods to mount the transponder. This will also make a fairly direct and short run of coax to the transponder antenna.  There are still two supports for the center access panel that are not yet installed when the photo was taken.

With the seat cushion installed, I think the only panel that will be visible is the one on the right, forward side.

I have some wiring that I still need to route under the left side of the seat, so I am probably going to add one more access panel on the left, aft and mirror the size and shape of the right aft panel. 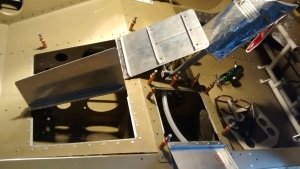 I bought the hinges from McMaster Carr.  They are rather inexpensive.

Last week I also cleaned up the ELT that I bought on ebay, and rebuild the battery pack.  It seems to work fine.  I made a rack to mount it aft of the seat, directly behind the (unused) battery box.

Hope you are all making great progress.

Hey Don, is that bottle really for oxygen? :) Chip