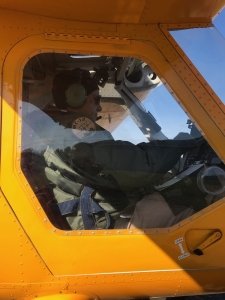 Recently, I had the opportunity to fly a 2-hour cross-country in the Merlin Personal Sport Aircraft (PSA).  I’ve been following this aircraft for almost 2 years and was intrigued by the concept of a single-seat LSA since there aren’t any out there that I know of.  I’ve always been skeptical about the utility of the LSA class of aircraft having flown several types over the years.  They just don’t do, for the money, what a good used Part 23 aircraft can do.  I’ve always thought of the LSA as an entry-level aircraft for those folks who either can’t afford the ridiculously expensive general aviation offerings or had medical reasons for choosing this type of flying.  But, a single-seat LSA might just be the ticket especially, if you can get the cost of ownership and operation down to a reasonable level.  I also wanted something that is easy and fun to fly.

The Merlin is in a class all its own.  When I first walked up to it I was struck by how small it is.  This ship is tiny!  After getting over the shock of an airplane that looks like a scale model of a Cessna I took a closer look at the construction.  For that I traveled to Sunny Florida to Aeromarine-LSA’s build center.  Chip Erwin was busy with the FAA examiners who were evaluating the build program for compliance with the 51% rule.  When I saw a batch of these kits on the floor, I was skeptical that the FAA would ever endorse this aircraft as a user-build kit.  They looked way too finished to me.  The Merlin kits require some disassembly before you assemble them. Upon close inspection the kits look like they are assembled when, in fact, they were trial fitted with soft rivets about every 5th hole marked with blue stickers which have to be removed and replaced.  The builder most definitely pop-rivets the whole airplane together but the time spent hunting for parts and fitting them in place is done in advance.  The holes all line up and although you may have to “chase” a few holes there are only a handful of holes you need to drill and those are on the few composite parts such as fairings and cowlings.  The beauty of this system is the parts that require precision alignment like the wings, control surfaces and fuselage are pre-jigged at the factory in hard steel fixtures.  Critical components such as wing spars are solid riveted at the factory to ensure their integrity.  I learned that the criterion for builders are tasks, not labor hours.  Once you learn how to pull a rivet, what’s the point in making you do that 10,000 times.  A few hundred rivets and you’ve got that part down.  So, I’m very impressed with how the Merlin is designed and especially the quality of the parts. 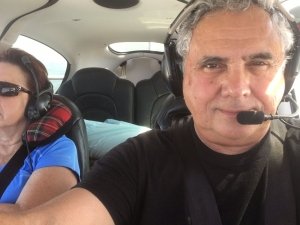 It took almost 6 months for me to get in the cockpit of the Merlin and try it out.  My first hop was solo.  Actually, there are no two-seat Merlins so that’s going to be your first hop as well.  Not to worry.  I got my briefing by watching the YouTube videos and getting a “briefing” over the phone because Chip wasn’t around that week.

When you get in the Merlin the first thing you notice is that there is plenty of room for even a big guy like me.  The controls fall right into your hand and the visibility over the nose is excellent.

Starting, taxiing and takeoff were no big deal.  The Merlin steers smartly and precisely on the ground.  The brakes are in your left hand just in front of the throttle.  I happened to be at a huge airport with 12,000ft runways for my first takeoff.  I was in the air in less than 200ft and coming out of the airspace halfway down the runway.  I’m not kidding!  The Merlin is a climber.  I only had to move the airplane 35 miles so I was lining up for my first ever landing on a small 3,000ft strip a half hour later.  One thing about single-seaters is you have to work out the landing pattern with no help.  The good news is you have plenty of time.  Despite a comfy 100mph cruise, the Merlin can slow fly like nothing I’ve ever experienced other than maybe a glider.  Lowering full flaps on final and milking off the power you will come over the threshold at 45mph and will be stopped before you get to the numbers.  You read that right, this aircraft not only takes off like a rocket it stops on a dime even with those handbrakes.

My next flight was a true cross-country.  I needed to fly about an hour to another airport into a 35knot headwind.  I climbed out and stopped at about 1500ft AGL over Midwest cornfields and forest.  This is what this ship does best.  The visibility is superb.  You can see almost straight down.  Level flight is when the bottom of the wing is parallel to the horizon just like a Cub.  The electric trim is easy and down there you can easily tool along with light fingertip pressure on the controls.  The Merlin I flew has a BRS so I was comfortable at only 1500ft.  After seeing how tough it is to stall this airplane I was pretty sure I could safely put down anywhere if I had to.  Having an emergency parachute made the experience even more comfortable.

I’ve got over 60 types in my logbook some of which are insanely fun especially when the taxpayer is buying the fuel, however, I truly enjoyed flying in an enclosed cockpit with spectacular visibility slow enough to take in details of the scene below.  The cockpit avionics takes full advantage of glass displays and GPS moving maps.  The situational awareness from this technology allows you to enjoy the flying experience, fully.  It reminded me of my early years in aviation when I was learning and taking it all in.  This ship is a throwback to pure flying and appropriate technology to monitor the engine and keeping you out of trouble with airspace not to mention alerting you to traffic, terrain and even the dang weather!

Ben Bosma is a retired Air Force fighter pilot with over 6,000 hrs of time in dozens of aircraft ranging from the F4 Phantom to a Cub on floats.  When he’s not tooling around in a borrowed Merlin he is traveling in his personal Cirrus G3 SR22 Turbo. 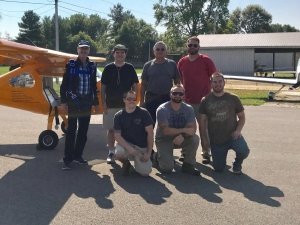