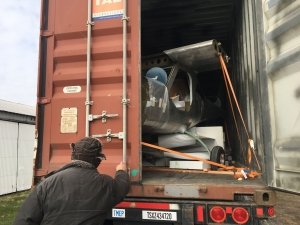 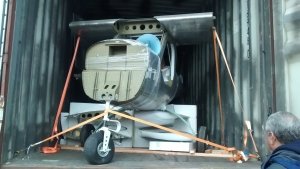 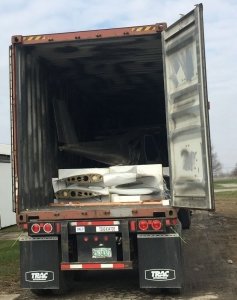 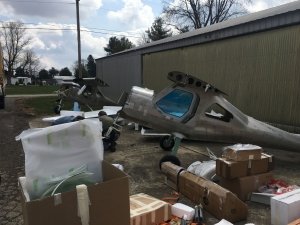 The long-anticipated shipping container (shipped 7 March) with four Merlins finally arrived in the wee hours of Tuesday morning, 10 April.  Stan (one of the four Merlin buyers) jumped in and did a great job  coordinating with the local freight company to get the container delivered to Phillipsburg (3I7).  Chip was still away in Florida, goofing of at “Sun n‘ Fun“ so it was left to Stan, Ben, myself, the freight driver, and the locals Sheriff to unload and sort through the entire shipping container.

Thanks to the folks at Steel Aviation for letting us unload and stage all four of the kits and the various bits and pieces at the Phillipsburg Airport!  Lots of anticipation as we finally broke the seal on the container and got our first-hand glimpses.  My Merlin was in there somewhere…

The initial impression was very good.  The first Merlin was very solidly strapped down with the nose pointing outward and the main gear nested into a make-shift set of chalks.  Taking it all in we could barely make out all four aircraft and two sets of floats (for a Cub?) suspended from the ceiling.  We didn’t initially see the boxes of parts sitting in the front of the container – All of the Merlins were tightly packed-in like well placed sardines.  Whoever packed this container clearly have Merlin-Shipping down to a science.  Merlin #1 and #2 were packed slightly offset from each other so that the tail section of each aircraft was near the cockpit of the other aircraft.  The aircraft were so well and tightly strapped down that there was no movement and no interaction between them (and hence no damage).  From this vantage point we could see that Merlin #2 and #3 were loaded slightly offset and nose-to-nose.  Merlins #3 and #4 were offset tail-to-tail just like #1 and #2. 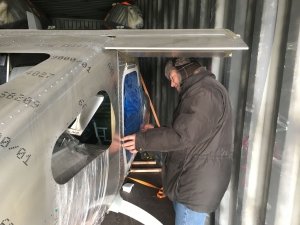 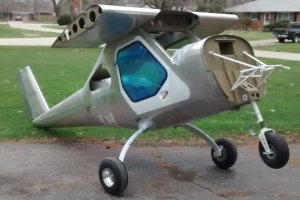 The height of the container deck was ~4 feet and even without access to a loading dock, Merlin #1 (serial # 036) came out without a hitch.  Thankfully each aircraft is very light weight, but without engine, the aircraft wants to rest on the tail… I stayed in the container, and held up the tail while Ben and Stan (on the ground) each lifted the airplane by the main landing gear, walked the airplane out of the container and then lowered it gently to the ground.  Even the driver for the freight company pitched in and lent a hand!  This all went so smoothly.

Merlin #2 (serial #037 – my kit) came out tail-first, but with help from the local Sheriff.  This time I held down the nose gear while Ben and Stan did the heavy lifting and with the Sheriff holding up the tail.  Then out came several sets of wings and elevators – Also very well packed and protected in custom-cut Styrofoam.

Merlin #3 (Stan‘s kit) was the easiest to offload – Stan backed up his rental truck directly to the back of the container – the deck heights matched perfectly and there was less than an inch of daylight between the two decks.  Merlin #3 (like Merlin #1) was packed pointing „outward“ so we simply rolled it right onto Stan‘s rental truck without a fuss.  Merlin #4 came out just as nicely as #2.

We then unloaded the boxes as well as the two airplane floats.  What an awesome sight! – Three Merlins on the ground in and one loaded and being tied down – nearly ready to head out to Washington State…  After sorting through and dividing up the various parts, Stan started out for his long drive back to Washington and I began loading my (borrowed from Ben) trailer for the drive back to Beavercreek.  The trailer was packed – Merlin, set of wings and the HKS engine.  The prop and all of the other bits and pieces filled up the back of my station wagon.  A long day – we started ~8AM and didn‘t wrap up until well past 5PM.  Chip said this would only take 30 minutes… 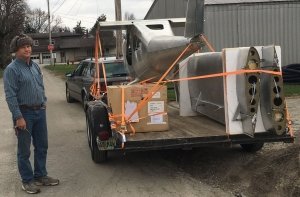 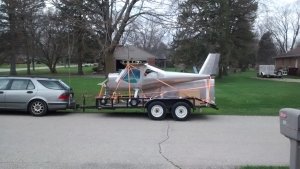 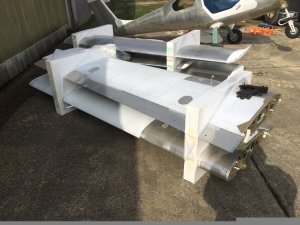 The drive home was uneventful but the offloading took much longer than anticipated – The little Merlin is also a conversation piece:  My neighbor directly across the street (he owns a Cessna 337) came over once he saw what I was up to and we had a nice long chat.  Then a little while late r, another neighbor who happened to be driving by, did a “double-take”, stopped his car right in the middle of the street and we had a good 30+ minute conversation about the Merlin.  Good thing I live in a quiet neighborhood with little traffic.  Once my wife arrived back home, she helped with offloading everything (engine, wings, fuselage, etc.).  And it all fits very nicely into one stall of the garage with room to spare!

Its now proving to be a very enjoyable and quick build – more about that next.