I am conflicted. 6 day air shows in the Florida heat, wind, ants, and sun are a marathon. Plus I actually have to talk to people. Yet this year I was actually looking forward to the show. At least for one day. Would anyone show up? Would the mask police be out with batons? Would it rain like cow piss on a flat rock all week?

Apparently, the risk of sunburn was greater than COVID. I doubt too many people went home with sun tan lines outlining the face mask. The show felt pretty normal. I only saw one guy with a full HEPA/charcoal respirator. Pretty sure his mask outline will be permanent.

As usual, the show promotors claimed record numbers in attendance. Rubbish. But still good numbers and I am sure a qualified success. Our booth had steady traffic and huge interest in both Merlin aircraft and the Vtwin. Our message and offer of price vs. performance and value is gaining a lot of traction. We are filling containers as fast as we can now. And we have new orders from the show which is not how we judge show success but it sure helps.

So enough with the babble and on to content. MERLIN LITE NEWS:

Ignore the wheel pants. We are not going for speed in an ultralight. Although they can be added for looks if anyone wants.

Ignore the 2nd wing tank. The wing is built for two tanks but one will be just a wing nose skin cover. For those who need 8 hours endurance the wing tank can be added but it will put the aircraft outside of the Part 103 limits.

The new wing with the huge flaps is already finished and shipped. This Friday I fly to Dayton to meet the container of Merlins which also has this wing packed. We have some bench tests to conduct then I will ship the wing to Florida for installation and then flight tests on our Merlin Lite prototype. I have been preparing for accurate data collection with the purchase of dozens of cones and a long tape measure for runway marking and more Garmin Virbs for multiple video angles and telemetry data. This will be fun.

HKS is gone. Rotax plans to discontinue 582 production. The Vtwin has a big gap to fill and it will do it very well with such a modern and well-tested engine.

We had our first customer-installed Vtwin on display on a PPG trike. The customer has it running already. The reduction drive shipment arrived to Dayton during the show so no chance to have them on display. But soon we will be flying. Two Merlins have Vtwins in installation now for our testing and documentation. Fuel system, exhaust, engine mount, and cooling are mostly finished. Wiring harness in design. We may move to an electronic throttle. 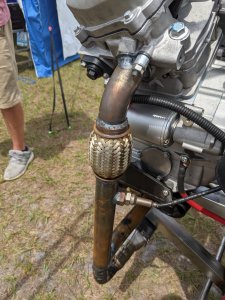 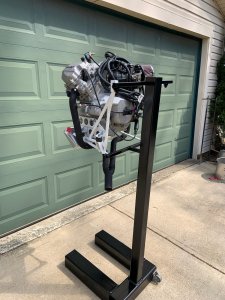 Not shown is the racing muffler from motorcycles which attaches to the stainless steel exhaust tubes.

The Vtwin generated a LOT of interest at SNF with plenty of aircraft needing a 4-stroke 60hp engine.

I am really looking forward to Oshkosh. Kinda…….

Container #1 Arrived! And other dribble
Scroll to top