From my esteemed colleague Ben Bosma, our Vtwin partner:

For my pilot friends;

It’s been awhile since I’ve added an update to my Hybird® project. Not to make excuses, but I’ve been busy with other things. I have a standing rule that no airplane gets built unless you do something every day even if it’s cleaning the shop. I held to that rule whenever I was home. 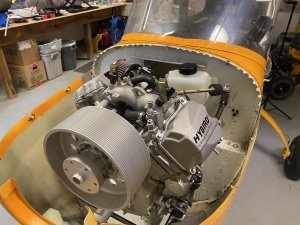 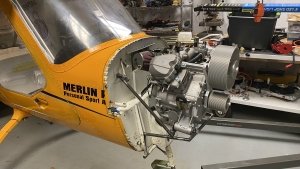 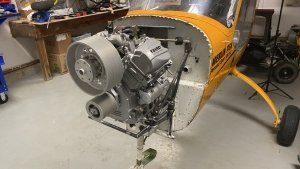 So, I have to make a new cowling for this ship. In order to do that I need to make sure the engine is in the right spot and pointed in the right direction.

The engine is not pointed straight down the centerline either left and right or up and down. Based on science (LOL) the engine is pointed to the right and down. There’s a specific amount based on a complex set of equations involving torque, blade angles, RPM, time of day, phase of the moon and lunch that determines the perfect angle.

Since those are all variables we use another technique called TLAR or more commonly “Kentucky Windage” which works like a champ. For you perfectionists the engine is pointed 3deg right and 1deg down. This compensates for most flight conditions and should eliminate a lot of rudder, aileron or elevator trim. All those surfaces have fixed tabs I’ll adjust during flight testing. That involves more yarn, tape and bare-naked eyeballs to achieve perfection.

So, I move the engine to where I want it, fabricate a mount and live with it.

Don’t be deceived by the apparent small size of the tubes on the mount. That’s 4130 chrome molly tubing used in race cars and most aircraft. Super strong, weldable and light.

UPDATE FROM CHIP: The engine mount is finished and now at the powder coaters. Next week we will display this new Vtwin at the Midwest Expo in Illinois along with the new Merlin Lite. This show by default has now become the biggest airshow in USA for 2020. Come visit us!

Pop quiz: TLAR is short for? Us engineers use it all the time. Answer in the next blog.

Merlin Lite Introduced at the Midwest Expo!
Scroll to top