As I was about to begin another round of flight tests with the new Merlin Lite the PPG engine monitor crapped out. I ordered a new one from Polini to replace the PPG meter I had left over in the hangar. By the time it arrived the weather crapped out. I spent a week in Dayton waiting for good flying conditions. Then I realized that I live in Florida. And Florida has mostly great flying weather. Plus I was freezing my butt off in Dayton and it has not even started to snow yet. 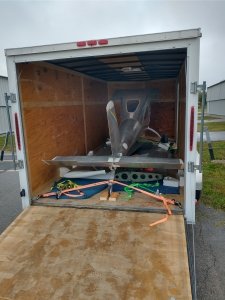 So the Merlin Lite is now packed up and heading south with all the other snowbirds. Flight testing and new videos will be forthcoming later in November. Maybe that’s a good name for it: The Snowbird!

The video/interview team of Dave Loveman and Dan Johnson have published  new Merlin Lite video. If you have not seen it yet here it is:

But my guess is you have already viewed it as the views are already over 20,000!!!

The popular consensus is that this aircraft is going to be a bit hit in the ultralight market. I hope so. Ice hockey is expensive with stiches and all.

The new longer wing for the Merlin Lite is nearly finished. The increased span and huge 3-hinge Fowler flap will bring the Merlin Lite stall speed down to Part 103 specs. Tricycle version also in progress. Watch this space.

In VTwin news we have new engines arriving this week. In addition to our planned Dayton flight tests we will be installing a VTwin to a Merlin in the Czech Republic. The concurrent flight testing will really prove the installation. Plus we will have an official Czech LAA engine approval once the LAA complete their test protocols.

Weighing and Flying Aeromarine-LSA’s Part 103 Merlin Lite — Does It Make...

No News?
Scroll to top